As seen in Dry Cargo International

Svendborg Brakes of Denmark, a specialist in advanced braking technology for industrial applications, commissioned two challenging installations to improve the safety and reliability of mine hoists at the Cayuga Mine, owned by Cargill Deicing Technology in central New York State, USA. Svendborg Brakes’ units had been fitted to Cargill’s hoists over 20 years ago and had gained such a reputation for reliability, performance and safety that it was only natural to turn to the same supplier for the new installations and upgrades.

The mine produces halite for the road deicing industry of the northeastern United States, and has two vertical shafts to access the underground workings. One shaft is used for hoisting the salt product up 635 metres from the mine, and the other is used for raising and lowering personnel and supplies 700 metres to or from the mine. Each shaft is fitted with a hoist to raise and lower the ‘skips’ that carry salt, personnel or supplies. As many as 130 miners will ride into and out of the mine on the personnel skip each day. Because both shafts are used as emergency escapeways, both hoists have to be fail-safe. 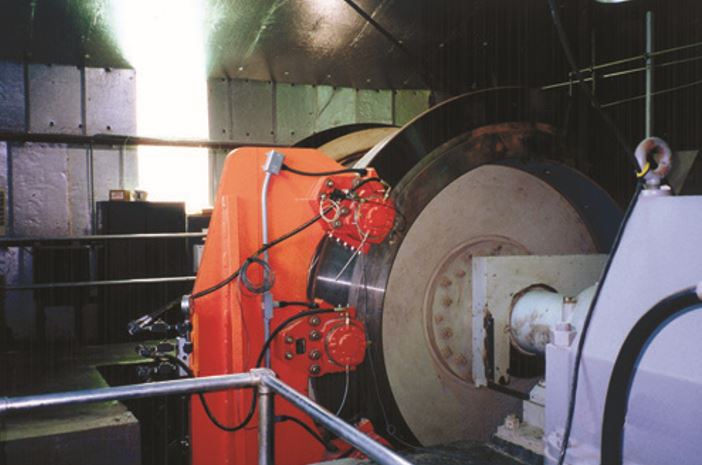 “We were in the process of upgrading the braking system of the service hoist so that the rope drum would have two independent disc brakes, and we wanted the caliper units to be Svendborg type BSFG 408 springapplied, hydraulic released units, because the existing disc was fitted with them in 1981 and they had proven to be trouble-free for over 20 years,” stated Dave Plumeau, senior engineer at Cargill Deicing Technology.

The existing hydraulic control was also to be replaced by a new system with independent hydraulic pumps and controls, and speed-regulated braking capability. This arrangement would ensure that one brake would be fully functional if the other failed in any way, and that the emergency stopping would always be gentle (softbraking) so personnel would not be injured, regardless of the load on board. 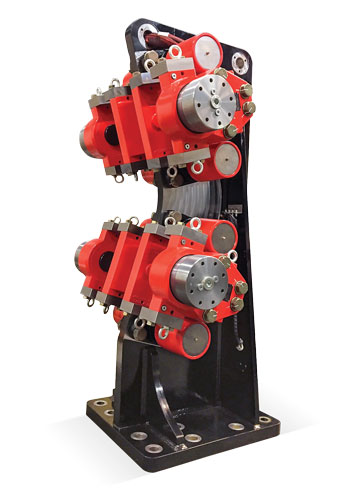 The mine was also installing a production hoist to replace the 70-year-old hoist that had become outmoded. The new hoist had been manufactured in 1980 but had never been assembled or operated. It was equipped with separate brakes for each rope drum as well as disc brakes for both the driving motors, the calipers for which were also Svendborg BSFG 408 units, but the hydraulic operating system for them had become lost. The mine needed two hydraulic brake operating systems — one for each hoist — with common components for both systems.