A leading steel producer needed a robust replacement braking solution for the overhead cranes at its round and round-corner square bar mill in the Southeastern U.S. The mill was experiencing repeated problems with the existing drum brakes and thrusters installed on multiple cranes throughout the mill.

The thruster seals were leaking because they couldn’t withstand the harsh mill environment. The brakes often failed, causing an excessive amount of unplanned service delays and production stoppages. The most trouble was experienced on the cranes near the furnace where the thrusters needed to be replaced after less than a year due to heat and contamination damage.

The brakes, installed between the hoist’s drive motor and gearbox, or directly on the hoist drum, function as service (holding) brakes. Each crane utilizes two to four thrusters. Rectifiers control the crane’s electric motors. However, when the crane is stopped, it actually moves back and forth slightly as the rectifiers try to correct the crane’s position. The drum brakes engage to securely hold the crane safely and precisely in a single position.

After visiting the mill with a distribution partner, Stromag engineers worked closely with the mill’s crane maintenance engineering team. After successful in-plant prototype testing, Stromag was initially awarded an order to replace a majority of the competitor brakes. Recently, the distributor was directed to supply Stromag units for all future brake replacements. 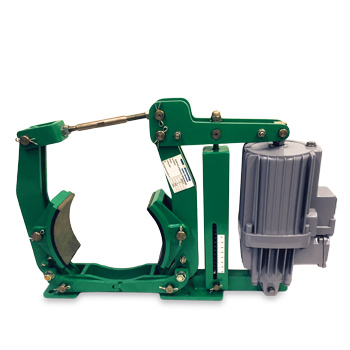