As the second largest seaport in Europe, the Port of Antwerp handles over 200 million tonnes of cargo each year. It’s vital that ships and barges are able to navigate through the port without obstruction, while rail and road links must also remain clear for passenger cars and commercial vehicles. It’s no wonder that there is a large network of bascule bridges (drawbridges) throughout the port, all of which need to operate reliably day and night. As part of the ongoing refurbishment of the bridge drive systems, Stromag’s 3CA2 electromagnetic disc brakes have been selected to perform stopping and holding functions.

Apart from Rotterdam, the Port of Antwerp handles more freight than any other port in Europe. Other than its size, what sets it apart from other ‘North Sea’ ports is its inland location. Sea trade ships are able to travel as far as 80 km inland, thus the port provides a more central location which is easily accessible for onward transport via rail, road and canal waterways. As the port has expanded over the years, a large number of bascule bridges have been built to allow cars, lorries and trains to cross the network of canals and locks.

In 2010, a long-term investment plan worth €1.6 billion over 15 years was approved. In addition to funding further expansion plans, part of the investment was to include improvements and updates to existing facilities. The Maritime Access department of the Flemish government identified that several of the bridges on the port’s right bank required attention. In particular, the Noordkasteel bridge, one of a side-by-side pair of Straus-type bascule bridges, was identified as having mechanical components - including its braking system - that had reached the end of their useful life and needed to be replaced. 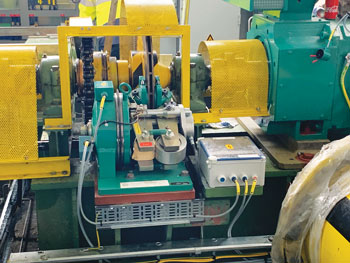 The 170 metre long bridge was built in 1980. It has a 56 metre long centre bascule section with a 1,200 tonne counterweight. The contractor responsible for specifying and installing the updates was tasked with identifying a braking solution that would offer stopping and holding capabilities while also withstanding the harsh environmental conditions with minimal maintenance. It turned to Stromag, a premier brand of Altra Industrial Motion Corp., which had supplied the original braking solution in 1980 and had proven the quality of its braking solutions. 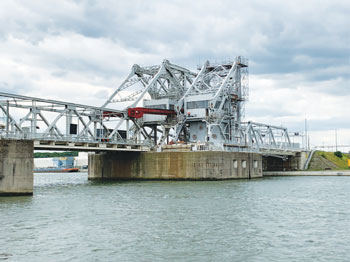 As the second largest seaport in Europe, the Port of Antwerp handles over 200 million tonnes of cargo each year.

The 3CA2 can be specified with different disc diameters as standard. For the Noordkasteel bridge application, Stromag engineers recommended the 705 mm diameter disc with two callipers, each with a braking torque of 2,900 Nm. A set of brakes was mounted to both sides of the gearbox to provide stopping and holding functions. A hydraulic release system was also specified for controlled release of the brake in the event of power failure.

Further to the 3CA2’s high performance and rugged design, it is equipped with automatic wear compensation to ensure a constant torque throughout the entire life of the brake pads. The brake pads have wear indicators included to make it easy to identify when they need replacing. In this way, the brakes could offer reduced maintenance loads as well as superior performance against the incumbent system.

Having provided support in the design and specification of the braking system, Stromag engineers were also available to assist with the installation, testing and final adjustments on site. Stromag will continue to support the bridge’s operators with on-site support and OE parts as required throughout the life of the braking system.