Originally built in 1898 and expanded over the next 30 years, the Twyford Waterworks continues to supply water to the city of Southampton and surrounding areas in Southern England. With all the original Edwardian-era buildings and most of the original equipment still intact, the historic pumping station was named a Scheduled Ancient Monument in 1973. Thanks to the efforts of volunteers, the restored site is currently open to visitors during selected dates throughout the year.

In 1985, the non-profit Twyford Waterworks Trust was established to run the facility. The site is currently owned by Southern Water Services who utilizes electric submersible pumps to extract 5 million gallons of water per day from the boreholes. 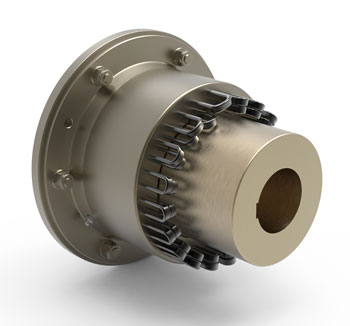 A Bibby grid coupling, originally installed in 1934, is still present on one of the plant’s diesel engine drivetrains.

The facility’s positive displacement pumps were originally powered by large steam engines which were replaced by three diesel engines driving centrifugal pumps in 1934. Gearboxes are installed between the diesel engines and the pumps to increase the engine speed to meet the pump speed for optimal efficiency.

There is a Bibby grid coupling on one of the plant’s diesel engine drivetrains that was installed back in 1934,” said Paul Fairbrother, of the facility’s Internal Combustion Team. “The coupling connects the three-cylinder diesel engine output shaft to the input shaft of the right angle speed increaser gearbox which is connected, via vertical line shafting, to the borehole pump positioned 50 meters below.”

According to Fairbrother, “The coupling has been open for many years, allowing visitors to see the inner workings. However, we plan to close it up soon in order to preserve its internal components for future generations”. 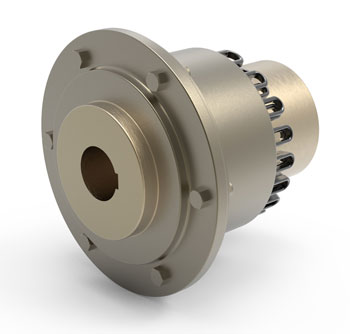 The model RFK212/BK coupling delivered to the waterworks in 1934 is still a current Bibby catalogue product that is manufactured today.

The Bibby Turboflex grid coupling was installed to transmit torque while protecting the critical engine and gearbox from potential damage due to vibration and torsional shock caused by the long driveshaft connecting the pump. It also compensates for any shaft misalignment that might have been present at set-up or occurred due to displacement or settlement during use.

Dr. James Bibby originally invented the Resilient (Grid) Coupling in 1917 and the 2000 Series is the latest development of this well accepted product. 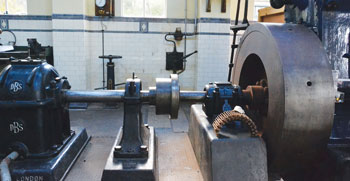 The Bibby Turboflex grid coupling was installed to transmit torque while protecting the critical engine and gearbox from potential damage due to vibration and torsional shock caused by the long driveshaft connecting the pump.

Since those early days, refinements in design and material specifications have kept pace with advancing technology, achieving significant improvements in power/weight ratios,” said Andrew Bargh, Product Manager at the Altra Couplings, Clutches and Brakes Group. “The tapered grid coupling’s circumferential flexibility is progressive due to the curved profile of the grooves that hold the spring in the resilient coupling design.”

As the grid coupling transmits torque, the flexing of the tapered grid spring damps vibrations and cushions shock loads,” Bargh explained. “This unique characteristic is due to the torsional flexibility of the coupling being proportionate to the unsupported length of each flexible grid rung. The resultant reduction in peak loading protects and extends the life of the transmission equipment.” 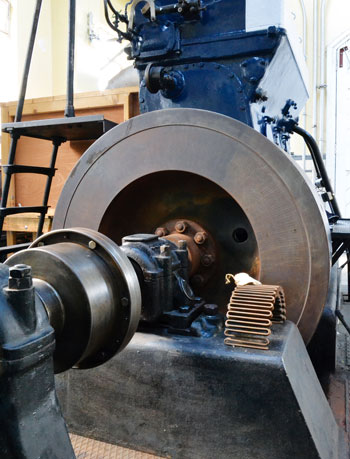 It also compensates for any shaft misalignment that might have been present at set-up or occurred due to displacement or settlement during use.

The coupling’s hub is precision manufactured from high quality materials, with the hub tooth profile scientifically designed to permit progressive loading under torsional shock conditions. The combination of the tapered grid and precision manufactured hub provides easy assembly. The excellent shock absorption characteristics, and the ability to accommodate misalignment protects the connected equipment.

The coupling’s grid spring is made from high tensile alloy steel which is carefully formed to the grid shape before hardening and tempering under controlled conditions. The grid spring surface is then shot-peened. This process leaves the grid spring with a residually stressed surface layer which is in compression and impedes the propagation of cracks. 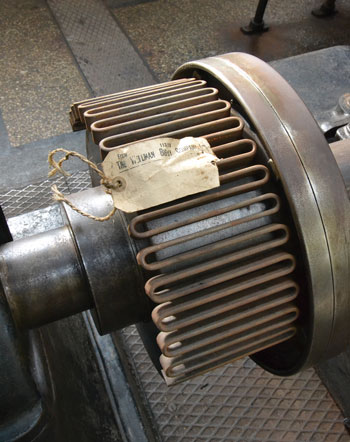 The coupling’s grid spring is made from high tensile alloy steel which is carefully formed to the grid shape before hardening and tempering under controlled conditions.

Since nearly all fatigue and stress corrosion failures originate at the surface of a part, the layer of compressive stress induced by shot-peening produces a dramatic increase in the working life and fatigue strength of the grid.

“It's a testament to the Bibby grid coupling’s design and reliability that it's still in production,” Fairbrother explained. “The coupling at the waterworks ran full-time from 1934 to the late 1950s, then was in service intermittently into the late 1970s, when the diesel engines were mothballed. I believe the coupling still has its original springs installed as we have a spare set of unused springs in storage that were probably ordered when the coupling was new, but never needed.”