The famous Mount Washington Cog Railway in New Hampshire has been transporting visitors to the highest peak in the Northeastern US since 1869. At the summit, 6,288 ft. above sea level, the mountain experiences some of the most extreme weather conditions in the world with wind chill temperatures down to -102ºF. A directly measured surface wind speed of 231 mph is a Northern and Western Hemisphere record. The 6-mile, 3-hour round trip features an average grade of 25% (some sections approach nearly 38%).

The railway fleet currently consists of a pair of steam locomotives, seven biodiesel locomotives and seven passenger coaches. The railway’s first diesel-powered locomotive was designed primarily by Al Laprade, now retired and serving as a consulting mechanical engineer. The locomotive was built entirely on-site by the Cog’s shop crew.

In 2001, LaPrade also designed the unique sprag clutch system installed on the passenger coaches that replaced the original ratchet-pawl system in use since the late 1800’s. The bothersome “dinging” noise created by the older ratchet system during the entire trip up the mountain was a major passenger complaint. In addition, the ratchet could not be trusted as an emergency stop mechanism because if it were suddenly applied with any speed, it would either bend the pawl, break a crossmember, a bearing, or worse, an axle shaft. 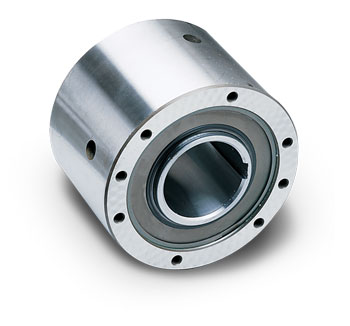 Model FSO 800 clutches have a torque capacity of 13,000 lb.ft. (17,680 Nm). Units are grease-lubricated with steel labyrinth seals and feature PCE sprags with Formchrome® and Formsprag“Free-action” retainers.

Formsprag FSO clutches were selected to meet the challenging backstopping application requirements and are currently installed on every coach in the fleet. According to Caleb Gross, Mechanical Engineer at the railway, the Formsprag clutches were chosen for several reasons. “Formsprag had the most engineering information available for our reference. Compared to competitors, the clutches also appeared to be thoroughly tested and engineered to give us confidence in using them in our application. Product documentation and honesty was key in our decision.”

During the early phases of the sprag clutch system development, LaPrade visited Bretton Woods (a ski area located nearby and formerly owned by the owners of the Cog Railway) to view a Formsprag clutch that was installed on a chairlift carousel. Based on the successful ski lift application, no further clutch manufacturers were considered.

The ski lift clutch turned out to be a similar model to the FSO unit specified for the railway coach retrofits. The specific Formsprag Model FSO 800 clutches, featuring PCE sprags with Formchrome®and Formsprag “Free-action” retainers, were chosen based on superior 13,000 lb.ft. (17,680 Nm). torque capacity and the general ruggedness of their construction. The compact 10 in. diameter FSO units also fit within the existing hardware and the small space available on the older coaches.

The supplied FSO units are grease-lubricated with lip seals. Grease lubrication was specified because of the concern of lubricating oil leaking onto the adjacent caliper brake rotor which could allow the brake calipers to slip. Also, grease will seep out slower and presumably more visibly than oil allowing more time to identify a leak.

“The specified FSO clutch has a lip seal mainly for the slow application shaft speeds (~50 RPM). Our maximum design forward/reverse speed is just shy of 5 MPH and this is a direct-acting clutch,” said Gross. “The simplicity of the lip seal allows for easy, inexpensive service if replacement is ever needed.” 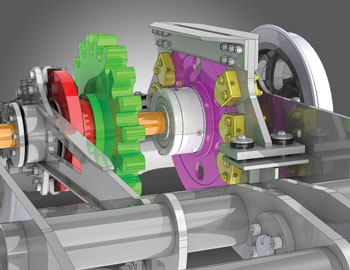 There are 12 hydraulic caliper brakes that hold the clutch rotor stationary when applied. To engage the clutch, the brakeman flips a valve which applies hydraulic pressure to the brake calipers, preventing the sprag rotor from rotating

A critically important FSO backstopping sprag clutch is installed on the down-mountain axle of each coach. The sprag clutch is engaged by the brakeman for the up-mountain portion of the trip, preventing any roll-back of the passenger coach.

There are 12 hydraulic calipers that hold the clutch rotor stationary when applied. To engage the clutch, the brakeman flips a valve which applies hydraulic pressure to the brake calipers, preventing the sprag rotor from rotating. The settings are left in this configuration (only forward motion allowed) until right before the train leaves the summit. For the down-mountain leg of the trip, the clutch is disengaged to allow downward movement. When the engineer is in the cab and ready to go, he gives the brakeman a signal to flip the valve back and release hydraulic pressure on the clutch rotor brake calipers. The brakeman stands ready at the brake wheel on the down-mountain end of the coach for the entire trip from the summit. 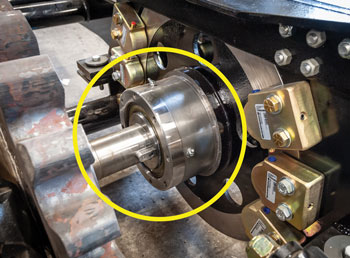 The compact 10 in. diameter FSO units fit within the existing hardware and the small space available. The sprag clutch is engaged for the up-mountain portion of the trip, preventing any roll-back of the passenger coach. For the down-mountain leg of the trip, the clutch is disengaged to allow downward movement.

The locomotive stays behind (down mountain of) the coach at all times and the two are not coupled (connected). There is an individual manual brake for each (up mountain and down mountain) axle for redundancy. Each shaft also has at least one brake drum or rotor, depending on the design. Newer air ride coaches have 3 modern air brakes which are all simultaneously applied through a parking brake valve. In both designs, the sprag clutch is also an added redundancy that can be quickly applied if needed to stop the coach from rolling downhill. The coach clutches are field-tested often. Every time a train comes to a switch, the locomotive must stop until the brakeman signals an ‘all clear’ to proceed. Every time this happens, the coach remains in position and does not follow the locomotive backwards downhill.

The railway is very pleased with the long-lasting performance of the Formsprag clutches. “The first clutch was installed on one of our coaches for the 2001 summer season. That coach has been in service since and the clutch has yet to give us a reason to consider replacement,” said Gross.