The capacity of a 53-foot semi-trailer is roughly 3,500 cubic feet, which is more than enough to carry the furnishings of two large houses. For those tasked with loading and unloading such vehicles, safe, reliable and easy-to-operate loading ramps can be invaluable. And when those people are not professional movers but parents of marching band performers, the need to facilitate the process is even more pressing.

Clubhouse Trailer Company (“The Clubhouse”) of Edmond, Oklahoma, is the only company that specializes in building custom trailers that marching bands use to haul equipment from performance to performance. Up until recently, they had been using hydraulic cylinders to deploy and stow loading ramps, but recently switched to electric actuators. In doing so, they are demonstrating logistics efficiencies and improvements that have implications well beyond the marching arts.

A typical marching band could have a hundred or more members, which translates to roughly a million dollars worth of equipment. In season, they may have up to 20 performances annually and sometimes need to pack up and move to different locations on the same day. Adding to the challenge is the fact that loading teams are comprised of volunteer band parents like Jeff Hadley and Drew Taylor, co-founders of The Clubhouse.

In 2010, their children’s high school was desperately in need of a trailer, so they decided to build one for them, using a refurbished semi-trailer. The result was stunning, and as neighboring school districts saw it arriving at band competitions, they wanted one too. At first, Taylor and Hadley reluctantly took on other projects, but eventually realized the full potential of their side project. In seven years, what was once a two-man weekend-and-evening hobby became a full-time business and the fastest-growing, privately owned company in Central Oklahoma.

The first Clubhouse trailers used two manual ramps that slid out from storage channels beneath the trailer floor and sat side by side for operation. As the business expanded to meet the requests of their growing customer base, Taylor and Hadley added folding ramps powered by hydraulic cylinders. The ramps were in two segments. Hydraulic cylinders anchored to the trailer floor raised and lowered the ramp, while two cylinders located on the underside of the ramp controlled the ramp extension section. When loading was complete, the cylinders pulled the ramp back up and stowed it standing up in the back of the trailer, ready for travel to the next deployment.

While hydraulic controls worked well, the growing business demanded more innovations, and The Clubhouse founders felt that hydraulic technology was limiting them.

“We used hydraulics because that was where the world was,” said Hadley. “They served us very well, but as the number of projects increased, we began to see performance inconsistencies in things like handling temperature extremes, trailer settling and weight distribution.”

“Our initial search for an alternative came up dry until we contacted Thomson,” Hadley continued. “That is when we had our ’aha’ moment. We realized that most of the functionality that we were looking for was not something you get from an actuator itself but in the functionality that you can build into your application with a smart actuator.”

For his next project, Hadley replaced the hydraulic cylinders that controlled the ramp with four Thomson Electrak HD electric linear actuators. These controlled the overall ramp movement — extending up to 28 inches — while the two that extend the ramp fold section reached 18 inches. (Figure 2) 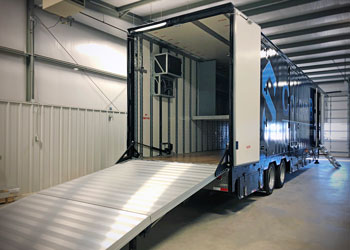 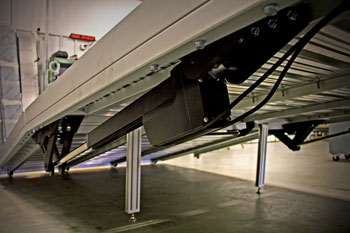 Switching to electric actuators immediately eliminated the extreme temperature response issues that they were running into with hydraulic cylinders.

“One week a band might be using the trailer in a cold northern climate, but the next week headed south for the Rose Bowl Parade,” said Hadley. “Such temperature extremes affect the fluid and can impact ramp folding, sequencing and deployment time, which requires frequent adjustment. Electric actuators are not subject to such variation and provide consistent operation, regardless of the environment and ambient temperatures.”

The electronic controls also made it easier to secure the ramp during travel or active loading. Each section of the ramp weighs 250 pounds and must be secured during both transport and operation. With hydraulic cylinders, once the power is off, there was still creep from seal leaks in these components, but the Electrak HD actuators have electronic hard-locking functionality that eliminates undesirable motion.

The Electrak HD’s onboard electronics, combined with CAN bus networking, ensure consistent and synchronized movement of the ramp actuators. (Fig. 3)

“As the ramp deployment starts, the segments have to kick out to get things started and then flatten out over the move,” said Hadley. “With the hydraulic cylinders, each operates independently, so if there is any shifting of variation in the cylinder performance itself, you run the risk of the ramp buckling or twisting. The Thomson synchronization software harmonizes actuator operation, telling each actuator when to move to maintain balance. The same thing happens when it comes back up, and overall, the synchronization feature speeds up the whole ramp operation.” 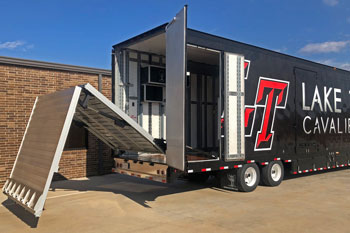 Eliminating hydraulic fluid itself also has many benefits. The Clubhouse team had been spending many hours hand-bending and mounting the stainless steel tubing necessary to bring the fluid to the hydraulic cylinders. The lightweight tubing is also subject to being crushed by instruments incorrectly strapped to the walls and, subsequently, hazardous leaks. With the Thomson actuators, all of the wiring is protected by nesting in the wall panels, under the floor or through the ceiling.

“With the Thomson actuators, we have reduced installation time by about 75 percent, and we don’t need band parents searching for hydraulic leaks from fittings during start-up,” said Taylor.

As they became familiar with the capabilities of the Electrak HD actuators, Taylor and Hadley began adding functionality to their trailers in ways they had never anticipated in their initial search for an alternative to hydraulics. Electric actuators have made it easy for them to offer customers new, unique options for any trailer project, including: 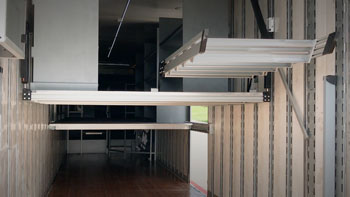 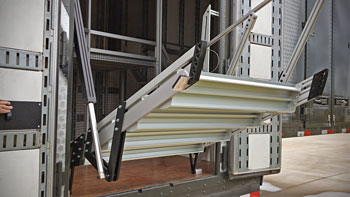 “When we were having trouble fitting an actuator assembly to the wall, Thomson came back with a design that rotated the motor 90 degrees,” said Hadley. “To enable us to mount actuators within our ramp frames while still connecting to existing mounting points, they added a four-inch extension to the actuator tube. To allow us to remove a damaged actuator, they gave us a way to unscrew the connector plug and leave the wiring harness in place for the next actuator. Whatever we needed, they were there with solutions.”

So far, The Clubhouse has deployed five different configurations of the Thomson Electrak HD actuator on various projects. One trailer, for example, is using 11 actuators — powering the ramps, front stairs, rear stairs, moving floor and Tubavator. The Clubhouse continues to build about 50 trailers per year, and with thousands of active high school, college and drum corps programs in the U.S., it is unlikely that their business will do anything but grow.

No one knows for sure which direction future band trailer innovations will take, but Hadley and Taylor are quite certain that electric actuators will be doing the heavy lifting.

The article "Thomson Case Study: Smart Electric Actuators Give the Marching Arts a Lift" appeared in the June 2021 issue of Power Transmission Engineering.